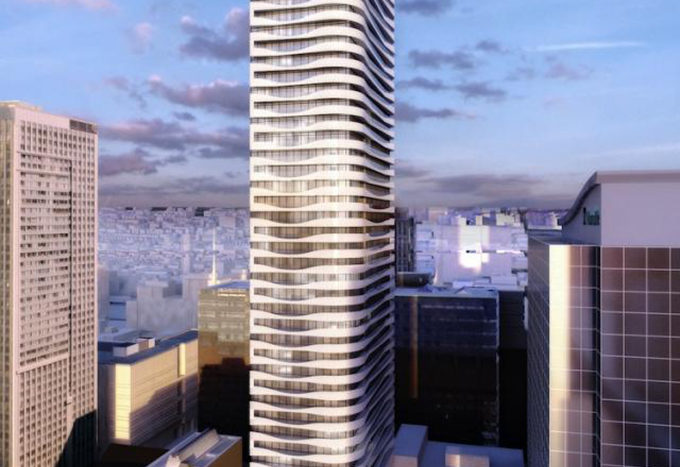 They said it couldn’t be done. That the site was too small. The tower too tall. Gary Switzer’s MOD Developments proved the naysayers wrong with the Massey Tower. The 60 storey project is now gearing up for construction.
When MOD Developments bought the imposing neoclassical bank at 197 Yonge Street, it was a beautiful turn-of-the-century building, albeit forlorn and decaying. The former Canadian Bank of Commerce Building built in 1905 had stood vacant since 1987.
MOD Developments set out to restore it and integrate it with a distinctive 60 storey tower. The developer also set out to strengthen the community, giving historic Massey Hall a piece of the site fronting onto Victoria Street for its revitalization. Presumed lost, the bank still had many of its original details intact, including a striking early 20th-century mosaic tile floor.
The Massey Tower’s 699 units range from minimalist 377 square foot homes to 1085 square foot suites. Kitchens will have European-style appliances with a choice of granite, composite stone or Corian countertops and porcelain or glass tile backsplashes. Suites will have pre-finished engineered laminate flooring.
The tower’s façade by Hariri Pontarini Architects will have wave-like curves in the balcony slabs for an organically rounded appearance. It will recall the rounded office towers of the Eaton Centre while distinguishing itself with its footprint. The tower will be set back behind the heritage bank building to maintain Yonge Street’s traditional streetscape.
With its main lobby housed in the restored heritage bank building, the Massey Tower will make strong first impressions on visitors. There will be two concierges, a porter and an automated parking garage. The condo will also feature guest suites, lounges, an exercise room, a sauna and a terrace.
The Massey Tower has downtown Toronto on its doorstep. The location is great for shopping with the Eaton Centre across the street. Dundas Square is one of the city’s most lively public spaces. Massey Hall hosts some of the biggest names in music. Ryerson University and the Financial District are just blocks away. The subway runs under Yonge Street with stations nearby at Queen and Dundas Streets.
It’s no surprise that the Massey Tower won BILD awards like Project of the Year, Best Building Design, Best Sales Office and Best Model Suite in 2013. MOD Developments defied the naysayers for one of the city’s best projects. Integrating heritage with contemporary style, the Massey Tower will uplift a block of Yonge Street with its revitalizing spirit.

WANT TO STAY UPDATED ON MASSEY TOWER? JOIN OUR VIP INSIDER’S CLUB BY FILLING OUT THE FOLLOWING FORM:
[condoForm]